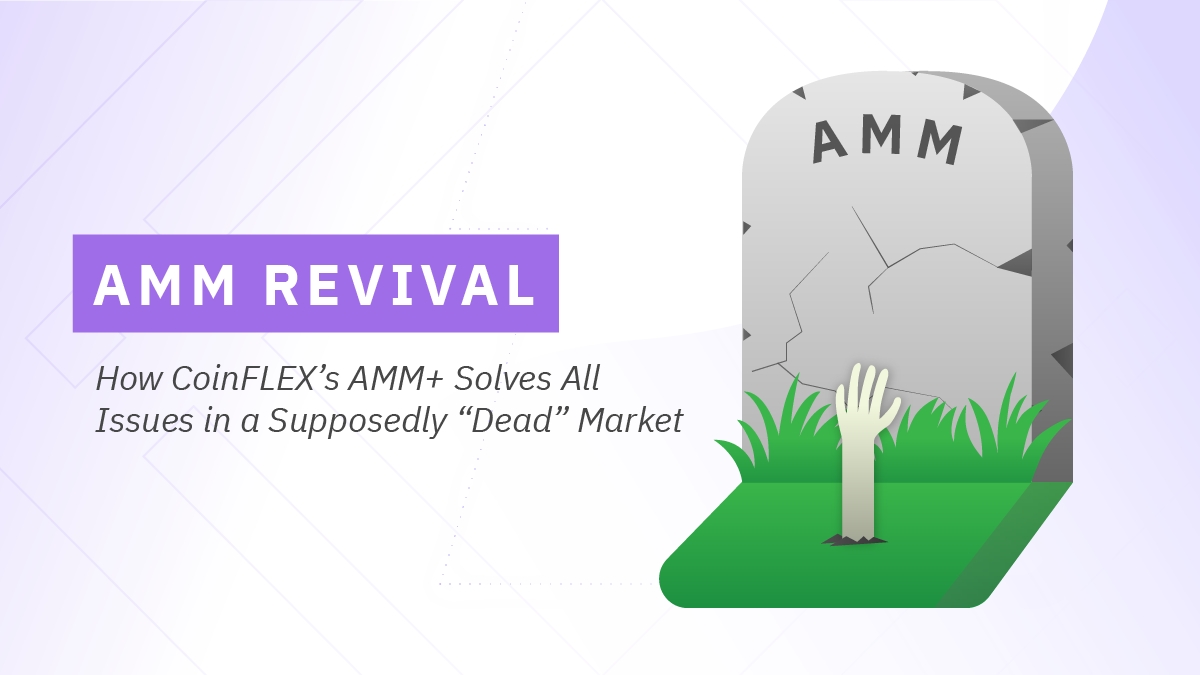 All content expressed is purely for entertainment and educational purposes only. This is not financial advice. Do your own research before investing or trading.

On May 9th, 2021, Anthony Foy the CEO and co-founder of Qredo Ltd, released an article titled “Automated market makers are dead”. Foy argued that although AMM’s provided decentralized exchanges (DEX) with the mechanism necessary to compete with centralized exchanges (CEX), it’s primitive and inefficient financial model has resulted in arbitrageurs becoming the biggest winners instead of the intended target market – liquidity providers and traders.

CoinFLEX however combines the CEX and DEX models bringing the two seemingly dichotomous worlds together to revive the “dead” industry. While in traditional DEX and AMM models, Foy is correct in his point that traders are subjected to issues such as high gas fees, poor executions, and how the lack of interoperability forces traders to explore different DEXes to avoid “slippage or partial fills”.

However CoinFLEX’s combination of having both large institutional investors, as well as the option for retail investors to become market markers in their AMM+, provides two avenues for the platform to receive liquidity that can counter the issues of slippage or partial fills.

Maybe the issue of AMMs isn’t its financial model, but the infrastructure in which the model is built on – i.e. the Ethereum blockchain. Consistent delays in it’s launch has rightfully made the crypto community somewhat impatient in the delivery of Ethereum 2.0. This is significant in a rapidly evolving industry such as crypto.

The recent launch of SmartBCH could be a solution to the issue of the lack of interoperability between AMMs. The SmartBCH whitepaper outlined one of its most successful and important layer-2 solutions could be its Simple Ledger Protocol (SLP), which could transfer tokens across SmartBCH. Furthermore, SmartBCH will be “compatible with Ethereum’s EVM and Web3 API”. This could help begin the process of developing solutions that bridge links between AMMs.

Foy also rightfully argues liquidity providers (LPs) are subject to impermanent loss as the price of an asset changes and that LPs can “lose out to regular market movements” compared to “market makers on order book exchanges”. As CoinFLEX is a CEX, it solves this problem by having a centralized order book. Out of CoinFLEX’s AMM+ three strategies: buy, sell, and neutral, yield farmers will only experience impermanent loss from the neutral strategy. This is because the buy and sell options only require yield farmers to input one asset and not two.

Again, Foy’s argument that the lack of interoperability and token incentives cause scaling issues, increase fees and delay transactions forcing AMMs to operate on new sidechains is understandable. However, SmartBCH’s multi-thread execution and consensus on the blockchain, in addition to the “strength and power of BCH’s dSHA256 computing network, the most powerful computer networld in the world”, as stated in the FLEX 2.0 whitepaper.

This means SmartBCH will keep these fees extremely low if these applications and contracts that are written on the Ethereum chain decide to move to the stronger infrastructure that is SmartBCH. Preventing these high gas fees from occurring will also prevent miners from prioritizing high gas transactions, which removes centralization of the blockchain from occurring.

Foy’s conclusion that user-centric tokenomics are required to incentivize all users to generate real long-term network value makes sense. CoinFLEX is ahead of the curve in this aspect. Such models include CoinFLEX’s one-of-a-kind yield bearing stablecoin, which is powered by the repurchasing market and is able to provide flexUSD’s high APY percentages. These gains are further capitalized by the perpetual futures market that allows up to 10x leverage on the AMM+.

It’s inevitable that early models in technological innovation will reveal many systematic flaws, however when it comes to AMMs that doesn’t mean we throw the baby out with the bathwater. AMMs have provided the retail investor with a phenomenal opportunity for passive income. Teething problems are not existential issues and simply require innovative ideas, like at CoinFLEX, in tandem with technological advancements, like with SmartBCH.

If you’re interested in crypto, but are too afraid or not experienced enough to actively trade, dipping your toes into passive income is a great way to ease into this new space without exposing yourself to the same levels of risk, time, effort, and dedication compared to active trading. Head over to CoinFLEX that offer the best products for passive income such as the first and only interest-bearing stablecoin and our top of the line AMM+.

If you are interested in CoinFLEX’s new Automated Market Maker, head to www.coinflex.com/amm to join the AMM+ Arena competition starting 23rd August. The weekly top 10  highest earners will be rewarded with USD or our very own FLEX coin depending on what trading pair is used!

Please find our responses here to questions from the SmartBCH community. Update Separate to the Questions: Below is a section quoted directly from our other recent blog post, which outlines our plans and goals for SmartBCH. SmartBCH Liability Transfer We are in advanced discussions (finalizing matters) with a group that…
Read Post

Many of you may have seen the Bloomberg article about our filing for restructuring or have received the notice by email.  This article elaborates on CoinFLEX’s next steps, specifically what each step depends on and our progress on each. Of course, these next steps could change.    Publishing Everything We…
Read Post

The Way Forward for flexUSD

Top of mind for investors is: “What will happen to flexUSD holders after the conversion?”  Conversion, in this case, refers to our plan to convert depositors into holders of the CoinFLEX Composite, including rvUSD, FLEX, and equity in the company.  It is possible to mandate a conversion for all user…
Read Post